Whenever the aroma of curry seim caresses my nostrils it takes me back to my adventurous childhood days. Come with me…..

The Julie mango tree stood in the backyard, motionless, only too move to the cool breeze that sauntered by ever so often. But, what was that vine that gracefully overtook it in the space of a month?

The leaves covered the mango tree like a soft green blanket, punctuated with wisps of stems with white garlands. The broad leaves spread open like green umbrellas to catch as much of the sun’s rays and thus quicken the vine’s growth. The knotted vines twined around thick strong branches, giving the vine the much needed support it required as it pushed its way through the mango tree’s foliage to greet the sunlight. 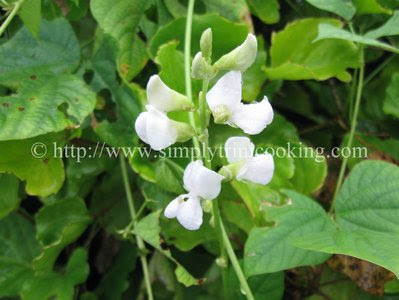 There was life…The ants scurried up the vines looking for food, sometimes they even made their nest at the base of the vine, probably it was out of convenience; the bees were busy visiting flower after flower, their wings abuzz; and once in a while the emerald dressed humming bird would make a pass, darting here and there in a nectar induced frenzy to gather the sweet, tasty morsel that awaited it in the next flower.

Then there was the beans themselves… There was a very distinct odour from the beans; fragrant but “wild” at the same time. I had the bad habit of smelling my hands after I picked the Seim because of that pungent odour. You just can’t get away from it. And, this is probably what set this bean aside from bodi and string beans for me. If you wiped your hands on your clothes, well, you were in for a day of smelling like you woke up from a bed of seim vines lol! Then too, the vines were rather strong but coarse. 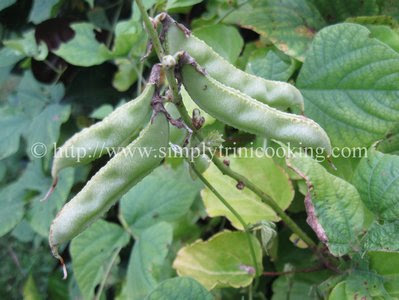 
My father always warned us not to play close to the Seim vine; since it could give you a nasty scrape that would appear like thin trail like burns the following day, especially if it caught you around the neck area. It would burn, but in the rush and excitement of play you soon forgot all about it…that is until the next day.

Curry Seim: A popular side dish

Seim (Hyacinth Bean) is a much used staple of vegetarians and non vegetarians alike here in Trinidad and Tobago. Used mostly as a side dish, CurrySeim makes a wonderful accompaniment, or supporting actor I would say, to many dishes including buss up shut, sada roti, bake and today’s protagonist, rice.

Curry seim is simplicity itself and also goes nicely with pickled meats such as pig snout, pig tail, smoked bones, salt beef, stew chicken….the list just goes on and on 🙂

To make things even better, Seim, to me, propagates easily. In other words, if you have a fence just plant a few seeds and watch them grow. And, if you have access to bamboo, make ah jankee or machan ( bamboo platform) and you could even sell some Seim….$8.00 ah pound lol!!
Enough of me ole talking, here’s Curry Seim and Rice. 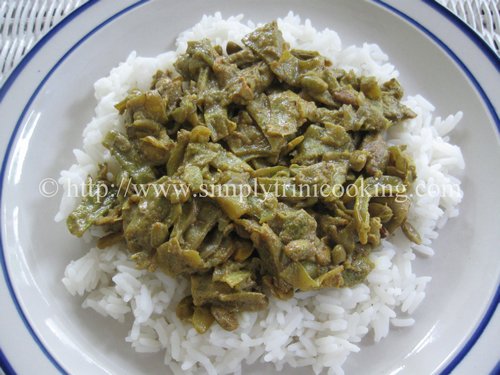 Boil rice, drain and set aside. 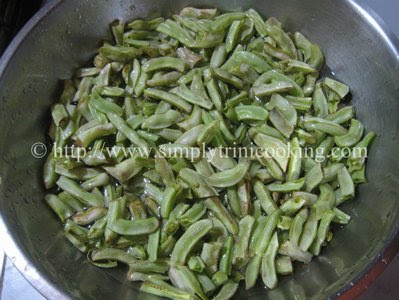 Wash, clean and cut up the Seim. 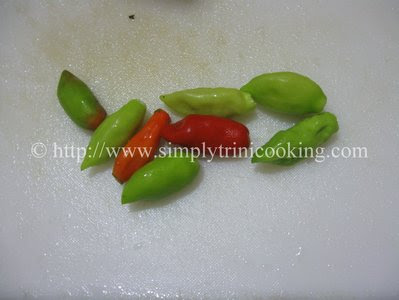 Chop the pimento peppers, garlic and onion. Set aside. 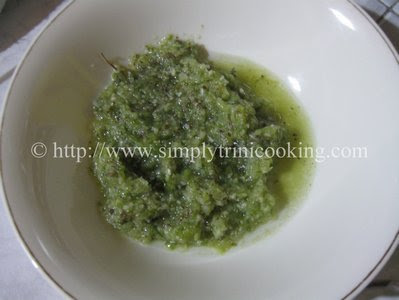 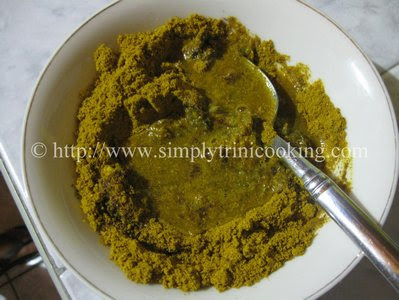 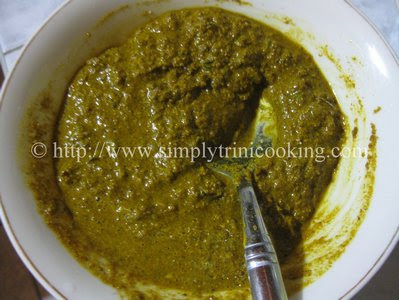 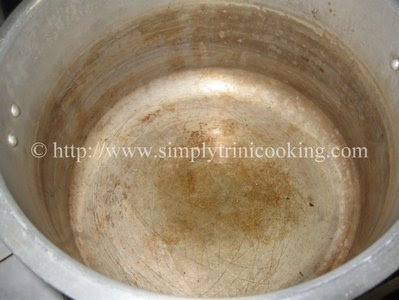 Heat the oil over a medium flame.

Note: As you can see from the pictures, all the currying is done in the pressure cooker. This will save you time which of course means less wares to wash up when you’re done. 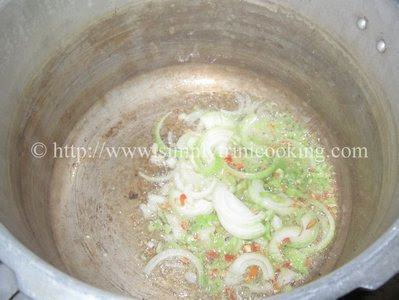 Then add the chopped pimento pepper, garlic and onion. 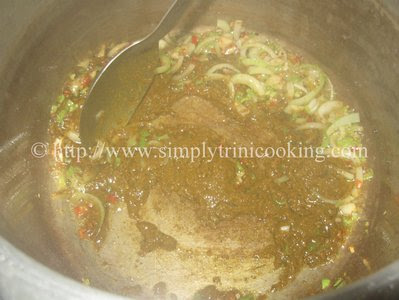 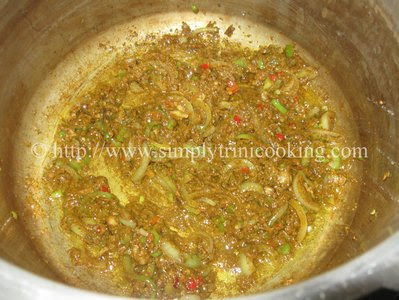 When the onion looks translucent pour in the curry mixture and let cook for 1minute
or until it starts to look sticky. 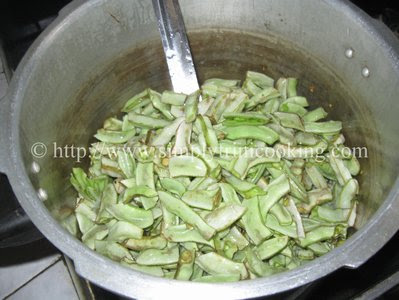 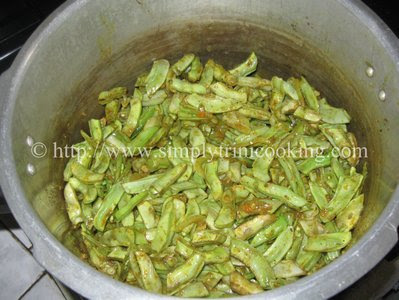 Add the seim and mix in with the curry. 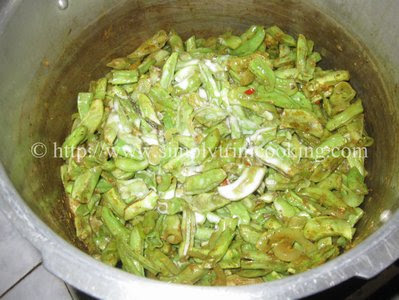 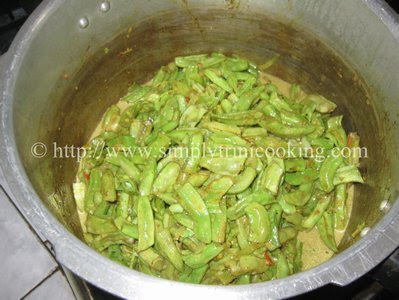 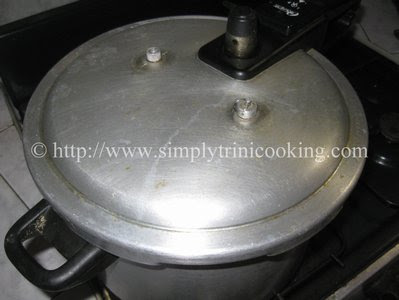 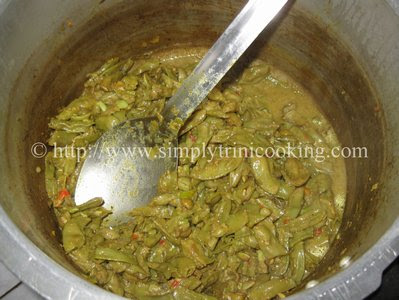 The Seim looks nice and tender now.
You can adjust salt to taste if you want. 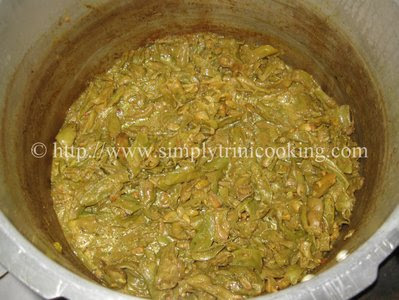 So there you have it, eating on the cheap in Trinidad and Tobago. Yuh belly full with a hearty meal of Curry Seim and Rice (meat optional) and yuh have a few extra dollars in yuh pocket. Who say yuh can’t survive? 🙂

Anyhow tomorrow is Divali so I goin and sleep. Lots to do…. and I eh sayin what ah comin’ with dis time. See you all tomorrow. 🙂

So how did your curry seim taste; I’ll love to know.