You are here: Home / Articles / How Media Affects Food Consumption

We are exposed to many forms of media on a daily basis while we go about our various activities, and most times we are unaware of how the media affects food consumption. We meet ads in the form of posters along the streets and on buildings. We also meet ads while we watch television and surf the internet. Over 50% of all advertisements are done by the food and beverage industry and are especially geared towards children and youths. Increasingly, this target audience is getting younger and younger, mainly due to the desperate bid of most companies to capture this market as early as possible.

The food and beverage industry even spends more than the ads posed by cancer institutions and preventative health organisations. One of the worlds biggest drinks company had a global advertising budget that exceed $1.6 billion U.S. in the 1990s. Certainly, a company would not spend so much on advertising if the advertisements were not working. One can easily confirm that advertising has successfully shaped the buying habits of the population, especially children, and the way products and brands are viewed because the evidence is before us in plain view. All we have to do is open our eyes.

The Purpose of advertising

The purpose of advertising is generally to introduce a product, reinforce familiarity with a product, and/or convince purchase of the product. Advertising becomes part of the buying process when the consumer uses it to progress through the stages in order to eventually make a buying decision. An effective advertisement would therefore encourage respondents to display behaviours such as discontinuing the use of old brands in favor of new brands; buying a popular brand product because a celebrity uses it or driving a particular car because it supposedly makes them feel better than their neighbour.

One way to explain how advertising works is through the psychological concept called classical conditioning first demonstrated by Ivan Pavlov. This method is routinely used by marketers to manipulate consumers’ emotions in an effort to persuade them to buy a product or manipulate their thoughts, at a subconscious level. Therefore the unsuspecting person transfers emotions attached to an unconditioned stimuli to a new conditioned stimuli. This explains why people are sometimes unaware of their attitudes towards certain products.

We see it often, advertisers pair their product to create positive images and linkages, in the mind of the viewer. So drinks are paired with a well-liked celebrity or an attractive man or woman; cereals are enjoyed by a loving family and pastries are baked by a rosy-cheeked cartoon… all accompanied by pleasant music, beautiful scenes or even extravagant posh surroundings in an effort to make the consumer feel the need to spend. 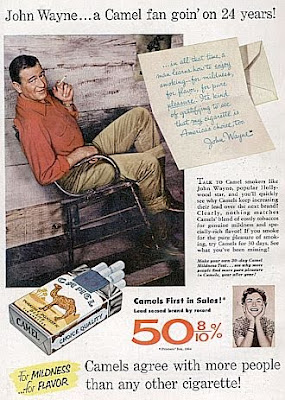 A camel ad of the 1950s.
Many celebrities’ endorsement for the product helps promote them.
(Image from: www.pophistorydig.com/?tag=1950s-advertising) 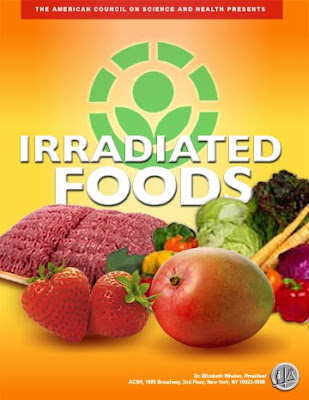 This symbol of a little flower is placed on the packages of food that was irradiated.
Irradiation refers to the process when food is exposed to ionized radiation which helps in extending the shelf-life of the food. It therefore reduces the chance of food contamination from disease-causing bacteria. However, irradiation is known to damage food.  Irradiated foods can lose important vitamins and minerals.
(Images from: www.singsongs.wordpress.com and www. uw-food-irradiation.engr.wisc.edu/Facts.html)

Sexual imagery is also elicited in the marketing of products and food as well. The links marketers can use are extensive. They can use events, symbols, flags, models, and glamor – all to produce a positive image about the product even though they know that the product may be harmful for human consumption.

Burger ad showing a woman in a Bikini.

Advertisers also use this technique (sexual imagery) to change the image of products as well. For instance, cigarette ads were for some time associated in advertisements with tough-looking men engaged in manly activities. It was also associated with beautiful women. In a bid to capture the female smokers market, the cigarettes were longer and thinner in the women ads to emphasize femininity.

Also, the image of a product can change constantly to simply keep the product sales from declining. All products go through a product life cycle – from introduction to the market to decline – but an ad can reinvent a product to always appeal to the young and stay in trend. Of course, the product packaging would change with the trends.

Energy drink television ad. This ad shows how a product can be reinvented.
Another energy ad. This one is more associated with sexual imagery.

So the next time you go out eating in a restaurant recognize that the beautiful music playing in the background, the brown earthy colours of the room and its furniture and the luxurious fine wines offered, are all unconditioned stimuli intended to evoke that pleasant feeling associated with the environment, the host, and the food. Perhaps, now you would be more comfortable to spend money lavishly while you are submerged in luxury.

This brings me to the concept of reciprocity norm. The idea states simply that it is a social norm to repay in kind what one receives from others. So why not pay more for that warm hand towel or tip the waiter a few extra dollars!  Therefore, the strategies used to manipulate emotions are not singular and it is often used in combination with other persuasive tactics. The results from the few known advertising studies suggest that classical conditioning is effective in advertisements. For example, sexual images in advertising has shown to be appealing and very persuasive.

Music has also been known to influence behaviour and, if I should add, morals. It is the Platonic idea that good music makes a good moral society. However, the definition of good music is subjective and the the ultimate goals could easily be based on the promotion of the musical tastes of the dominant class. However, many believe that there are insufficient studies that support the various hypotheses behind music (and this is another issue that deserves a separate writing).

This burger commercial uses music to persuade the buyer by developing a romantic relationship between the product and consumer.

However, changing attitudes is not as simple as that. There are other factors that would determine persuasive effectiveness of an advertisement. However, a person is less likely to be persuaded to buy a product if they don’t care to listen to the reasoning behind the purchase of the product. Marketers that are aware of this employ extra-message peripheral cues with the advertisement to make it more credible and relevant for the listener. This may involve the idea of allowing the person to reflect or engage in a little critical thinking before desirable action could occur.

Burger commerical. The burger is elevated as the ideal food for men.

We should be skeptical of advertisements, as it is known that companies continue to spend millions on advertising studies. Also, the food industry is engaged in a number of strategies, sometimes considered questionable, to control the dissemination of information and the general response to their products. As you have seen, advertisements can be very persuasive in changing food buying and personal eating habits all for monetary gain and has very little to do with health.

All consumers should therefore recognize the many advertising efforts/ strategies used by marketers to manipulate their emotions. This also involves helping children and youths become more informed consumers as they are the main targets. Simply turning off the television; not reading newspapers or magazines; or not surfing the internet is impractical if one is trying to avoid advertisements.

Become Aware of How the Media Affects Food Consumption

It is wiser to make a concerted effort to become more aware of the effects of advertisements on ones emotion and thought processes. A good way to increase one’s resistance to the manipulation of advertisers and the media is by learning about the various strategies they employ in the advertisements (a.k.a media literacy). So next time you see an ad try to remember all that was mentioned in this article and apply it before you make a buying decision.

Kids are the main targets for junk food commercials. The commericals appeal to children because of the use of music, dance, repetition, and colours