You are here: Home / Articles / For the Rich taste of Coffee

Coffee drinkers can now proudly say they like coffee and by golly it is good. With what we are learning each day about coffee, we at Simply Trini Cooking are devoting this week to Coffee. 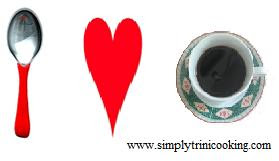 For many years we have heard that coffee is not good for you, and many of us still believe this. One of the most outspoken ills of coffee was in 1675 in England when a “Women’s Petition Against Coffee” was issued. Coffee drinking was more common among men during that time, and men drank this “pitiful” and “bewitching drink” in coffee houses (where women were not allowed). Married women blamed the men’s “sensible Decay of that true Old English Vigor” and their adopted “Frenchified” ways on this new substitute for liqueur they called the “unhappy berry”. Fortunately, this petition did not affect the consumption of coffee in that time.

For the Love Coffee

Who did affect it was King Charles. King Charles was convinced that coffee houses were “places where the disaffected met, and spread scandalous reports concerning the conduct of His Majesty and his Ministers” and so, in 1675, he closed all coffee shops in England. This ban was removed and in 1688 when the shops were reopened, only due to the loss of revenue. Even of lately there is no shortage in finding books that seek to discredit coffee drinking. Most refute coffee as destructive to the body because it is dehydrating and toxic.

Yet coffee drinking continues, coffee houses continue to flourish and spread. However, Such things like this occur because for decades many coffee lovers really believe in the goodness of coffee.

“Moderately drunk, coffee removes vapours from the brain, occasioned by fumes of wine, or other strong liquors; eases pains in the head, prevents sour belchings, and provokes appetite.”– England’s Happiness (1699)

“Physicians say that coffee without cream is more wholesome, particularly for persons of weak digestion. There seems to be some element in the coffee which combined with the milk, forms a leathery coating on the stomach, and impairs digestion.”– Buckeye Cookbook (1883)

“In most households a cup of coffee is considered the one thing needful at the breakfast hour. But how often this exhilarating beverage, that ‘comforteth the brain and heateth and helpeth digestion’ is made muddy and ill-flavoured! … You may roast the berries ‘to the queen’s taste,’ and grind them fresh every morning, and yet, if the golden liquid be not prepared in the most immaculate of coffee-pots, with each return of morning, a new disappointment awaits you.”–
Janet McKenzie Hill, Practical Cooking and Serving (1902)

“The morning cup of CafÃ© Noir is an integral part of the life of a Creole household. The Creoles hold as a physiological fact that this custom contributes to longevity, and point, day after day, to examples of old men and women of fourscore, and over, who attest to the powerful aid they have received through life from a good, fragrant cup of coffee in the early morning.”–Picayune Creole Cook Book (1909)

“The coffee is prepared in such a way that it makes those who drink it witty: at least there is not a single soul who, on quitting the house, does not believe himself four times wittier that when he entered it.” — Charles de Secondat Montesquieu (1689-1755)

The Effects of Coffee

Today, there is more and more research surfacing about the effects of coffee and most with some surprising information. For instance, one research compared nondrinkers with coffee drinkers and found out that coffee drinkers are less likely to have type 2 diabetes, Parkinson’s disease and dementia. Another study showed a decrease in asthma among coffee drinkers.

There are more studies… a large study done at Brigham and Women’s Hospital showed that each cup of coffee consumed each day resulted in a 10% decreased chance of developing kidney stones in women. And men who consistently drank two to three cups of coffee daily had a 40% decreased risk of symptomatic gallstone disease compared to non-coffee drinker.

Most scientist also recognized that the research are not all solid; there are other habits that may be overlooked during the research. What they do know about coffee is that each cup of coffee has 2.4 calories, and that it is a good source of pantothenic acid and riboflavin. Coffee has other vitamins such as niacin and choline, and minerals such as magnesium and chromium. It is this antioxidant capability that helps prevent tissue damage caused by oxygen-free radicals.

The Addictive Aspect of Coffee

One of the main reasons coffee was recognised as being bad for your health was because of its caffeine content, in every cup there is about 94.8 mg of caffeine. Caffeine is a stimulant which effects the central nervous system. Thus, it can increase alertness, increase focus, and coordination; but can also cause restlessness, headaches and dizziness. In greater amounts it can cause insomnia and increase agitation. It can also increase blood pressure, heart attack and stroke. Caffeine can also be addictive.

Some Good New about Coffee

However, the best news coffee drinkers may be welcoming lately is the benefit that it has been linked to lower Parkinson’s disease and Alzheimer’s disease. This benefit was due to the caffeine in the coffee. The studies showed that this caffeine protected the brain production of the abnormal protein beta-amyloid, which is thought to cause Alzheimer’s disease.

The study also indicates that a substance called granulocyte-colony stimulating factor, or GCSF, sparked the production of new axons, the communication cables that link nerve cells together, as well as new nerve cells themselves. Thus GCSF treatment can even “prevent full-blown Alzheimer’s in patients with mild cognitive impairment, a condition preceding the disease”.

With this said, we are convinced that coffee can have its added bonus. That is why we at Simply Trini Cooking agree to label this week ( August 1-7 ) as coffee week. Cheers to the freedom of drinking coffee!