Snow Cone and The Museum

It was another scorcher of a day and the sun was out in full force attacking every inch of T & T's soil, but I was brave enough to venture in the hot sun to go and visit to National Museum and Art Gallery with my wife and sister. The trip to the museum, located on 117 Frederick Street, was an adventure for me, since I never went to the museum... (Yeah, Ah know, big man like me never went to the museum in meh life lol!!).  I couldn't photograph anything (Museum Rules) so the next best thing I could do is to talk briefly about the experience.

I was amazed at some of the artifacts showcased. One room showed rock samples; bottles of petroleum and its derivatives; and models of different parts of the oil industry: oil rigs, catalytic cracker. There was even a "Christmas tree" (No, not that kind of Christmas tree) on display. It's an assembly of valves, spools and fittings that's assembled like a Christmas tree. Still don't know what I'm talking about? Here's a picture of one.

I was really blown away by the Amerindian relics that I saw, especially some of the pieces they got from the Pitch Lake. I saw an oar, a seat and part of a skull. Other rooms had items from the races that inhabit the island. There were musical instruments, furniture, documents, and other defining objects on display. This was really an eye opener for me. You know, we always learn about our history from what we read and what is said to us, but when you see objects that tell of our past in this way, history comes alive. School children need to see where their ancestors came from. Unfortunately, we weren't able to see much of the paintings because of renovations, but there was a small exhibition titled "Identity" by Dutch artist Yasmin Champagne, in another part of the museum that was awe inspiring...Well, at least to me. I liked her use of line, colour and texture. The painting "Zipped up" was my favourite...a black woman putting on white skin?.. This painting has some serious undertones going on! Truly an exploration/ confusion/ deception of identity occurring.

Snow Cone and The Museum

Yes! Ah know ah like to talk. The brief writeup putting on long pants now 🙂....Anyhow, on to the snow cone....The walk about the museum really called for a thirst quencher and luckily there was a snow cone vendor right outside the museum. I had only one thing in mind while we approached the snow cone man...I wanted mine with some condensed milk drizzled all over the top. But I was in for a surprise. Jack, the snow cone vendor, poured condensed milk after the first layer of shaved ice and still added condensed milk all over the top. It was sweet to the last drop: just the thing to ease the scorching sun that afternoon.

You will notice from the pics that he used two flavours. The yellow one was guava while the red was the usual snow cone syrup...Some recipes worth researching here already don't you think? let's look at some pictures shall we?

Enjoying Snow Cone at The Museum 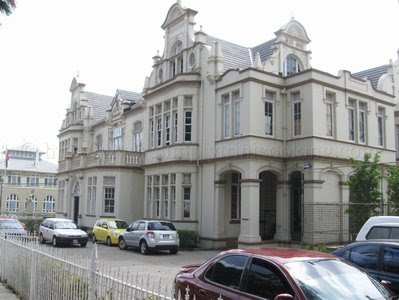 The National Museum (note to self: get a better shot next time). 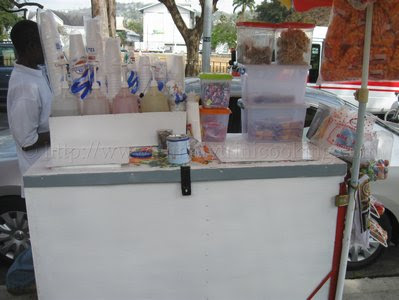 My sister and I liked the vendor's "setup". It was neat, organised and clean. 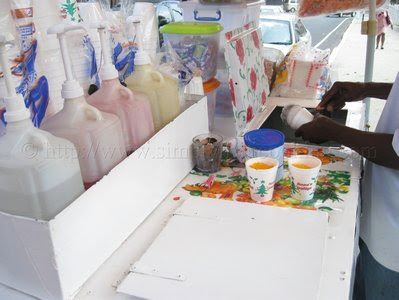 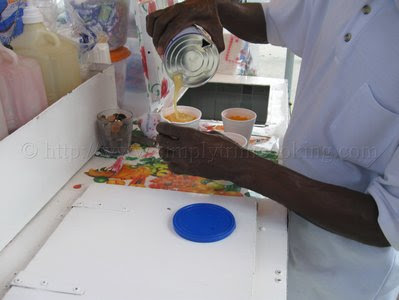 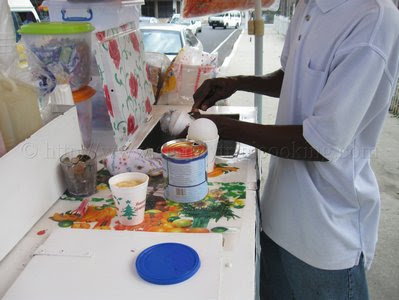 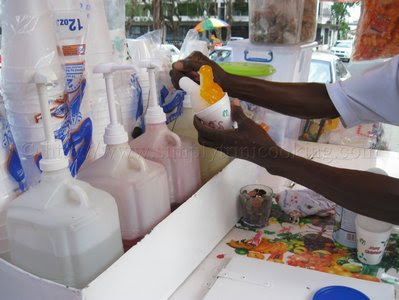 and two small "ears" as I would call it. Guava syrup on one side.... 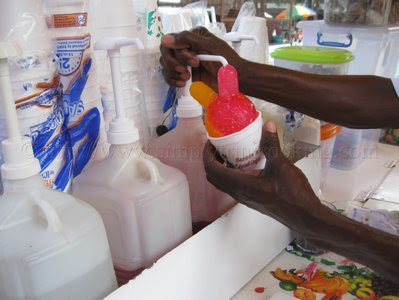 and the normal red syrup on the other side.
Any one knows what flavour the red is supposed to be? 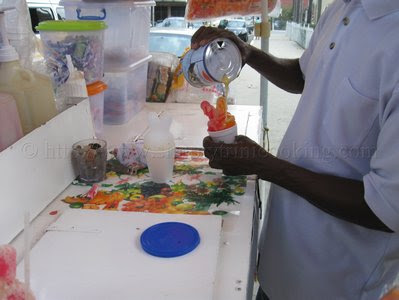 And the big finale: Condensed milk all over the top. Oh! Don't forget the straw.
This visit was a memorable one for me. I hope you enjoyed it. Coming up next: a recipe for a cold sweet treat....(No, is not snow cone).
Don't forget to leave your comment about "snow cone and the museum"  in the comment box below.