So as I was saying I wasn’t able to post for the past few days because I was very busy ….Limin’. Yeah, school’s out and I had a few places to go and people to meet, and at the same time I got some beautiful pictures of we trini food at it’s best. And, this is where we come to me and two of  my “cooking” friends and my mentor going to a pot spoon throw down in Lopinot. 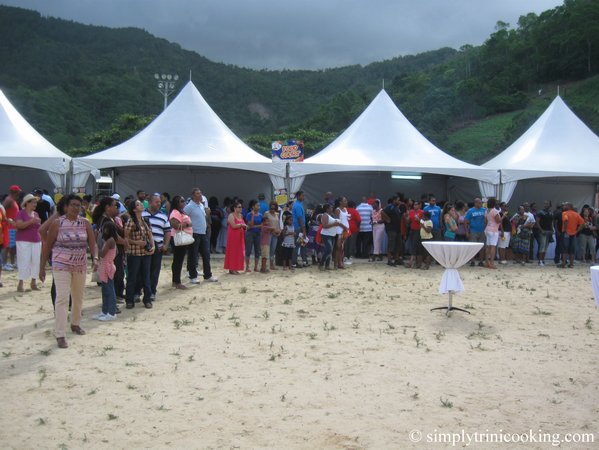 Spectators braved the hot sun to “take in” the entertainment

Pot Spoon Throw Down in Lopinot

So what is a pot spoon throw down? It’s a cooking competition/ (say slash) food fair/ entertainment/ drinks … All in all, is lots of food, music and lime down de place. So, in my words,… “if yuh wasn’ dey yuh miss out.” …..Organised by TDC, it is geared at the promotion of our rich culinary culture in Trinidad and Tobago with cash prizes for the winners of the competition. There’s also a demo kitchen where different local dishes or trini inspired dishes are prepared right in front of you and of course there’s food on sale from bake and shark go right back.  So, if you’re like me and love yuh trini food, you better find yourself there to experience the world of trini food….. But before we reach dey, ah have to give allyuh de story……..

I’m currently finishing up a 20 week cooking course and my cooking instructor said that as a class we should start checking out the “cooking scene” in Trinidad and Tobago, now that we have acquired a lot of skills and are at the level of being able to do catering. So in between our discussions she asked me if I was going to the pot spoon throw down in Lopinot that was coming up. I didn’t know that there was one being planned, but I always heard about it and wanted to go to one. Since I’m already so deep in de food thing now, this was an opportunity I shouldn’t pass up. So right there and then I organised with two of my cooking colleagues to go ,and lime, up Lopinot and take in we local food culture.

Now we ready to go to Lopinot……

Sunday came and we drove along the winding country road to Lopinot deep in the valley. I was really amazed at how big this event was. There was a stage set up with lots of large tents around, and people were bustling about  buying food, checking out the demo kitchen, liming by de bar or just relaxin’ under the huge trees taking in the whole atmosphere….. and breeze ….lots of cool breeze….Still feeling that breeze… 🙂 Parking was a little challenging because you had to park at the side of the road and if you didn’t go early you would have found parking a bit difficult. Luckily for me, my car is small so I had no trouble squeezing in a space that seemed that it was left just for me.

Anyhow, as we entered we got some nice bags with magazines and brochures promoting places to dine in Trinidad….Fine dining restaurants like Chaud, Chaud Creole, Chaud Cafe, Thamnak Thai, Melange, Bootleggers, Hakka, and Mt Plaisir, ….really too much restaurants to mention. Then there was the pholourie stall set up by Lion brand, promoting their product like baking powder and pholourie mix….Of  course we got free pholourie….(yeah man we didn’t too long reach and we was gettin’ free food ahready lol!!) …. We got around to the demo kitchen that was already in full swing with a demonstration of tostones topped with creative local cuisine. I had mine with a mix of avocado and smoked herring salsa. Delicious!

While that was going on, the four teams taking part in the competition, were busy cooking their tasty creations and getting ready to plate…..What caught my eye, since this was a Spanish Cuisine Competition, was a team that were preparing local “Spanish” inspired dishes. Another team did a Roucou Pork that caught my eye as well but the eye candy did not stop there because by that time we were getting hungry. We strolled along to the other side where there was lots of local food on sale. There was Bake and Shark, Bake and Kingfish, Pastelles, Doubles, Ice Cream, Stew pork, Provision, Souse, Tortillas and a whole lot more….just writing about all that food making me hungry lol!!. 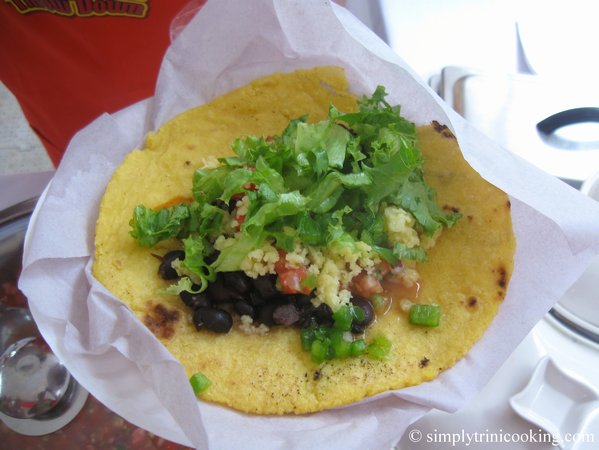 The stall that caught our fancy was Casa de Salina. They had food that was innovative but still trini to its core. There was Guava barbecue chicken, Bucaneer Pork with Stir fried veggies, Cheesey Mashed Potatoes, Bucaneer Madras Lamb, Pineapple Rice, Cherry Rice, Herbed Dasheen, Green fig salad, Plantain….Now you see why I decided to buy at this stall. We wanted to taste everything on the menu so my friend Orson bought the Guava Barbecue chicken, with pineapple rice etc,…I bought the Bucaneer Pork with Cherry Rice, fig salad etc and my friend Seeta bought the Bucaneer Madras Lamb etc…. 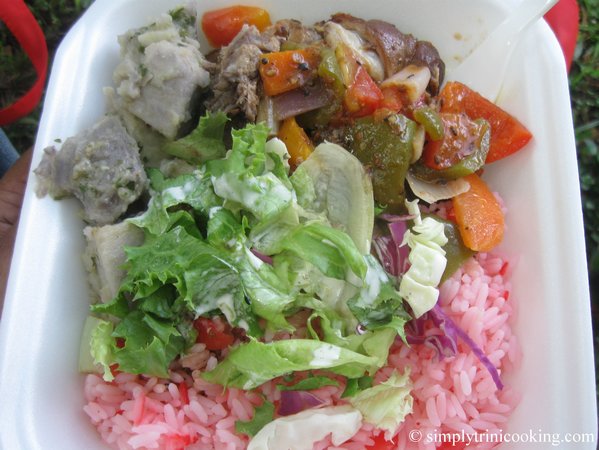 All I can say is that I just had to find out more about the cook because the food was appetizing and satisfying. So, off we went to find out more about the busy cook that stood whole day selling food to an unending line of customers. By evening the food was almost sold out. Miss Mc Kenzie told us that she graduated form Hotel School two years ago and was now about to embark on a catering business. Hailing from Lopinot, I could see the influences of the community in her food which I liked immensely. I liked how she used the technique of Bucaneering  (Pronounced book-a-neering) the meat. This is a technique of cooking that was used long ago to preserve meat. More on this later. You don’t see this technique being used much in trini cooking, but here Miss Mc Kenzie was using it with flair to come up with tasty trini innovations…… I like that!…..

By evening the place was teeming with people from all over Trinidad. Parang music was in full swing and Uncle Errol was giving jokes and singing about how you have to watch that part of yuh body Called Ah Heart lol!!! Absolutely hilarious … Food was going fast at the stalls and the demo kitchen was crowded with demos of making trini chocolate and Paime……. 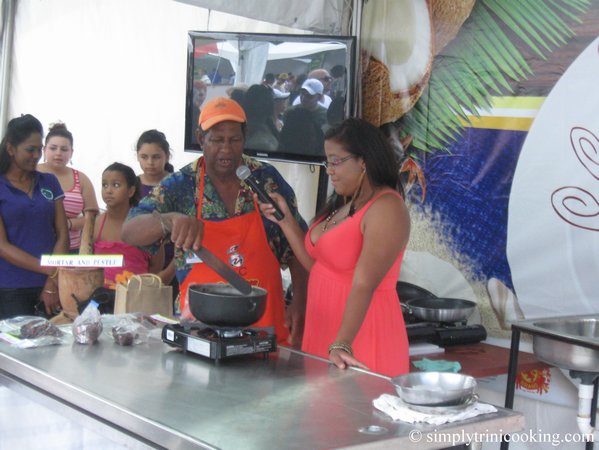 Amidst the Parang Music, the beers, and the food, I felt happy to see our Trini Culinary Heritage in all it’s splendor. Of course before I left I had one last beer and got me a box of Guava Barbecue Chicken to carry home…………. 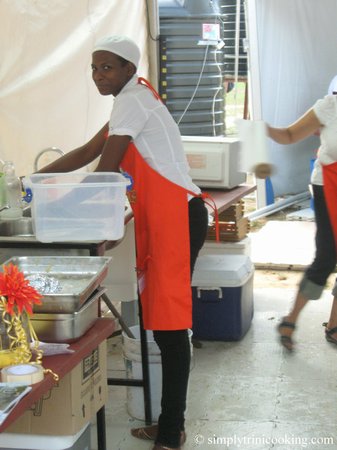 My belly was filled to my throat, the beers buzzed for a while then left, we had a very good time and all we could do was plan for the next Pot Spoon Throw Down in Mayaro…Seafood and Coconut ….

Will you be there? I know I will….Who knows we could make it a Simply Trini Cooking Lime. See you there 🙂

P.S. I couldn’t put all the pictures here for you all so just check out the fanpage where you’ll see lots more on the Pot Spoon Throw Down in Lopinot.