You are here: Home / Articles / Coconut Oil: Oil From the Tree of Life

The coconut palm grows abundantly in the tropics and it gives the islands the feeling of paradise and romance, especially along its coastlines. It typically grows to 60 to 70 feet tall and has a life span of up to 70 years. The fruit of the coconut tree is considered botanically a seed, but in the tropics it is mostly considered a nut. It bears year round in bunches of 5 to 12 nuts every month.

The coconut palm takes 14 months to fully mature. A young coconut is completely filled with liquid (referred to as coconut water) and has little meat. The meat is soft and jelly-like in texture and can be eaten with a spoon. A fully mature coconut has less liquid and more meat. Its meat is thick and hard and less sweet than the meat of the young coconut.

The content of meat and liquid varies as the nut matures. Fresh mature coconut meat is also used to make make coconut milk, but fresh coconut meat can spoil quickly and so it is often dried to last for many weeks and longer if sealed in an airtight container and kept cool. However, it is the meat of the coconut that is used to make coconut oil that has captured the most controversy within the last two decades and encourage a number of nutritional fallacies.

The Controversy behind Coconut Oil

Coconut oil has been around for thousand of years. Evidence of its early use is seen in Ayurveda literature. In India, the oil was used in food, lotion, pomades, baths, and medicines. It was also used in Asia, The Pacific islands, Africa, and Central America. Coconut oil was introduced to the Europeans as far back in the 15th century. 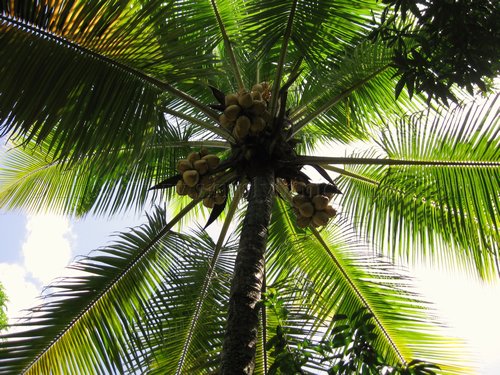 By the 1800’s, coconut oil was a main form of trade for many of these islands and countries that had an abundance of the coconut palms. It was not only an edible oil; it was used to make soap, candles, lamps, pomades, and many cosmetics. In order to produce a quart of coconut oil, 10 coconuts were needed. An increased demand in coconut would obviously mean higher prices. The leading country producers of coconut oil were Philippines, Malaysia, Indonesia, and India. It was also produced in Latin America and South America. These are the producers that were mostly affected by the biggest propaganda ever hatched in the field of nutrition.

Consequently, coconut oil, because of its high content of saturated fat and its new stigma as an “artery-clogging fat”, became an undesirable and an “unhealthy” choice in cooking. This perpetuated a perfect environment for other types of oil producers to take advantage of this growing consumer fear. And that is just what they did to push their cheaper hydrogenated oils.

By the 1980’s, more effort was place to encourage the use of soybean oils. The anti-tropical oil smear campaign promoters were very vocal and were soon successful in decreasing the overall consumption of the tropical oil, including coconut oil, in the American diet to about 2%. Food manufacturers even went as far as stating in their labels that their products “contains no tropical oil”.

The Vegetable Oils is Perceived As Healthier

The scientific and political propaganda was successful in getting the interest of the public to replace tropical oils with cheaper polyunsaturated soybean oil from American farmers. The general public and commercial food industry supported the idea that polyunsaturated vegetable oil, such as soybean, safflower, and corn oils, were good in reducing total cholesterol, better than coconut oil. (One important fact to note is that this method of reducing total cholesterol was not sufficient to determine a healthy cholesterol. A person with a total cholesterol reading of 200 mg/dl could still have heart problems. The best way to measure cholesterol is by the use of the cholesterol ratio that takes into account the amount of HDL and LDL. A cholesterol ratio of 5.0 is normal, and above this value indicates an increasing risk of heart disease). By the 1990’s, competition in the edible oil market was practically eliminated. Tropical oil exporters from Malaysia and the Philippines responded to what they termed as “vicious scare tactics” used against their products. 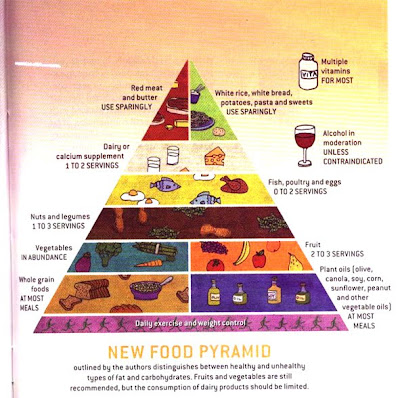 An early food pyramid that reflects the support of polyunsaturated oils.
No mention of coconut oil as a source of fat.

The fallacies are exposed

The coconut oil manufacturers stood up to dispute the common misconceptions promoted throughout the years. They sought to clarify that coconut oil contains absolutely no cholesterol because it is derived from a plant and that it could not raise blood cholesterol or contribute to heart disease. Also, the saturated fat in coconut oil (Medium-chain fatty acid or MCFA) is different from the saturated fat in meat. They explained that the MCFA in coconut oil is heart friendly, helps protect against heart disease, and does not have a harmful effect on cholesterol levels. Their claim propelled a number of studies to find support for this information.

A number of interesting facts came out of these studies as they observed the use of coconut oil in some populations that had a high consumption of coconut oil. In these populations, such as the populations of the Polynesian islands, showed the lowest level of cholesterol and low levels of mortality from heart disease, despite the fact that the consumption of coconut oil was quite high. The coconut oil was part of the staple diets of all Polynesian, Melanesian, and Asian peoples. They had much better health than those in north America and Europe who didn’t use coconut oil. These people were relatively free from the the degenerative disease that plagued those under the American or western diet.

However, when these people substituted their traditional diet and adopted the western diet they found an increase in many diseases that was almost unheard of, such as gout, diabetes, obesity, hypertension, atherosclerosis, cancer, and arthritis. Other studies showed that these alternative vegetable oils increased the fat content of foods fried in it. The food therefore absorbed more fat and could cause an increase fat consumption, and worse its hydrogenated fat had a negative effect on blood cholesterol.

So the health benefits of coconut oil remains unheard of in many areas of western society still. Fortunately, coconut oil is still used in many countries and its benefits are being revealed. In India, Panama, and even Jamaica, the coconut is seen as a health tonic for the heart and is consumed like a normal liquid supplement. In these countries the coconut oil is known for its health-giving properties and therapeutic benefits.

The Properties and Benefits of Coconut Oil

Its fat is not stored like long-chain fatty acids which are converted into triglycerides in the intestine. Therefore, the MCFA from the coconut oil is easily metabolized and poses no risk to clogging the arteries, because it does not require lipoproteins or special enzymes to utilize the fat by the body. The fatty acid composition of coconut oil is mostly capric acid, caprylic acid, oleic acid, stearic acid, palmitic acid, myristic acid, linoleic acid, and mainly lauric acid.

Lauric acid is a unique fat that is also found only in mother’s milk. The fatty acids found in coconut oil has no harmful effects and can promote better health because it has antiviral, antifungal and antimicrobial properties. Coconut oil is stable and has a long shelf life; it could last up to three years. Also, at temperatures lower than 24.5 degrees C, it can convert to a white solid form. Therefore, coconut oil can stay fresher longer than any other polyunsaturated oils.

Here are some of the benefits of cooking with coconut oil: it can treat digestive or mal absorption problems; it can be used in commercial infant formulas; it reduces fat consumption and stimulates metabolism which can lead to weight loss; it helps regulate thyroid function, balance blood sugar level, increase energy, and promote overall heath. Therefore, coconut oil can help lower LDL cholesterol and prevent high cholesterol, arthritis, fibromyalgia, candida, herpes, allergies, psoriasis, influenza, diabetes, etc. It is an antibiotic, an immuno-enhancer and an immunoregulator. The quality of the copra in a coconut used to make coconut oil varies. Therefore, it is important to distinguish between (unrefined) virgin coconut oil (VCO) from the refined, bleached and deodorized (RBD) coconut oil if you are interested in using it as an edible oil. VCO is the pure, unadulterated, form of the coconut oil. It is the healthiest form of coconut oil because it is made with the least possible processing from fresh coconut meat and with absolutely no chemicals. VCO is colourless, it has a mild coconut aroma, and a mild pleasant flavor. It retains most of the phytonutrients and chemical properties already mentioned. RBD coconut oil lacks most or all of these phytonutrients and is therefore of a lower quality than VCO.

The RBD coconut oil is a hydrogenated coconut oil. They are made from older coconuts (damaged or undamaged). The dried copra is generally exposed to the sun before processing and gather an appreciable amount of bacteria and mold. It is refined and sterilized to remove much of the contaminants. Sometimes chemicals are used to extract the greatest amount of oil from the copra. As a result, much of the needed phytonutrients are removed. A less refined or lower grade RBD oil may have a slight yellow color because of the unremoved traces of contaminants. RBD coconut oil may have a mild musty or chemical taste. Poor quality oil or rancid coconut oil can irritate the throat.

The health benefits derived from coconut oil, particularly VCO, is remarkable and is certainly a necessary tree of life. The evidence is before us. We have part of the reason for the increasing epidemic of obesity, heart problems and diabetes that is short changing the longevity of many people in the west. Perhaps, it is time for society to start going back to basics if they wish to see a drastic improvement in the overall health of all populations.  There is little reasons why we should discredit Coconut oil.