You are here: Home / Recipes / Menus / Rice and Dasheen Bush Bhaji
There are some of the dishes that I post that hold a special place in my heart because it reminds me of the good and bad times that has passed. “Rice and Dasheen Bush Bhaji” is one such dish. The thing is, people would consider eating this type of dish as “poor people food”, who knows maybe it’s still the same stigma, because that is what you ate when there was nothing else or finances were tight. I may have been ashamed of what I was eating, especially when I went to school like, bake or sada roti and whatever filling there was, perhaps with curry aloo (potato) , fried ochroes, curry saim….. but now it seems different .

Bake, to me, isn’t just bake because I now know that it, together with roti, are types of flatbread that are enjoyed in many cultures and called by different names. I’m no longer ashamed to talk about Provision and Saltfish, or Baigan Choka because it represents who I am and where I come from. Food blogging, for the past few months, has made me proud of what I eat on a day to day basis because a lot of people from around the world appreciate what I do. 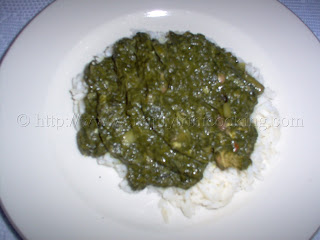 Rice and dasheen bush bhaji
We Trinis really don’t know what we have; the food we eat not only reflects us as a people, but it shows our history and how the cultures have survived, thrived, integrated and have synthesized into something totally new, innovative, and original……Trini style cooking now has an identity. Where else in the world would you get Chutney being a style of East Indian music and something to eat?
Today I share with you Rice and Dasheen Bush Bhaji. Bhaji could have many meanings to us Trinidadians so I’ll have to explain; the first meaning for bhaji could be the Spiny Amaranth (Amaranthus Spinosus) which ,by the way, is called Spinach. Another could be a variety of leafy green plants that include Spinach, Agooma, Dasheen bush etc. but the best description I could come up with is : a stir fry of green leaves from certain plants (agooma, spinach, pak choi etc.) seasoned to taste. But even this doesn’t quite explain dasheen bush bhaji because, unlike the other leaves, dasheen bush “melts”; you’ll see what I mean. To add to the confusion my wife calls this stewed dasheen bush and adamantly says I should change the title of the post. Well that will have to be another story because I’m not going there at all and if it does start I won’t be able to finish the post and we can’t have that can we?
Dasheen bush (taro leaves – Colocasia esculenta) has been a staple in our diet and each culture has used it in one way or another making from saheena to callaloo. Other than the leaves, the corm is one of the main provision found in any soup, boiled by itself , or together with the other provision like cassava ,yam, cush cush etc. With this dish you could add any kind of meat but I personally like to eat this with either saltfish or pigtail, the real traditional way. Whether it’s called dasheen bush bhaji or stewed dasheen bush we all agree that the steps are the same, no arguing there finally. Here’s Rice and dasheen bush bhaji or stewed dasheen bush…….between you and me you know it’s dasheen bush bhaji, right?

*The centre leaf is curled and tender, so this is the best to use 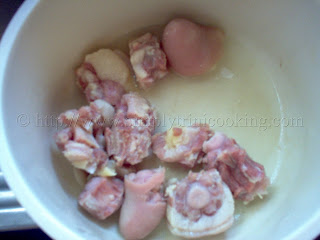 Chop and pressure cook the pigtail.
(If you wish to use saltfish, cook, clean, remove the bones, and break it into flakes.) 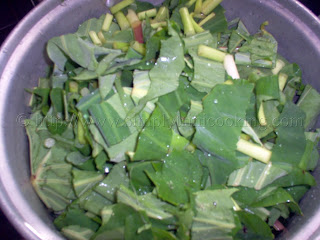 Chop and wash the dasheen bush.
Remember to always cut off the tips 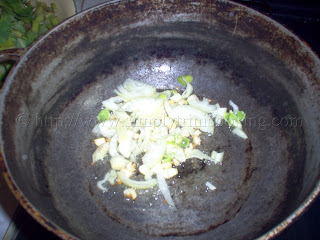 Cook the onion, garlic and pimento. 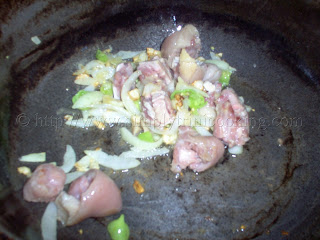 Add the pigtail (or the saltfish). 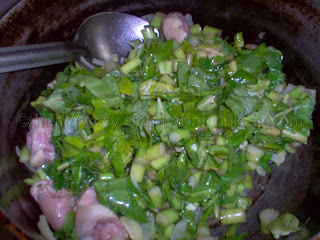 Add the dasheen leaves, and other seasoning. 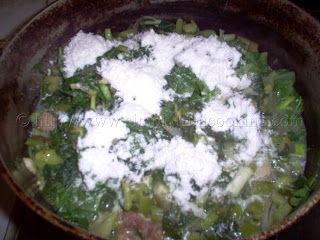 Stir in the coconut milk. 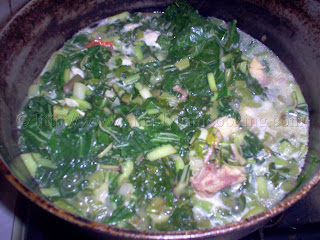 Cover and leave to simmer until most of the liquid is evaporated. 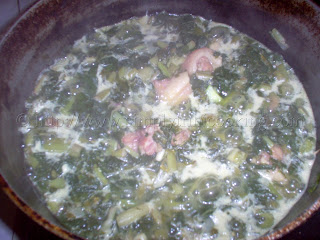 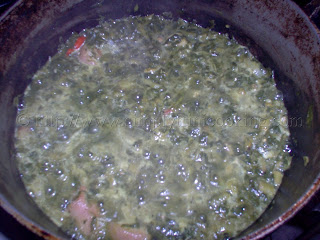 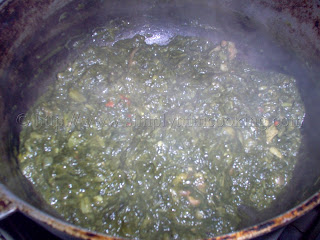 The cooked dasheen bush is ready to be served.
That’s it for another post. See you later!
Print this recipe

More from my site