You are here: Home / Articles / Oysters

Oysters are another popular street food or appetizer in Trinidad and Tobago, especially among local men. In Trinidad, they are harvested mainly from the Claxton Bay Mangrove System. The species of oysters that are harvested there are “Crassostrea rhizophorae“. However, these bivalve molluscs are also harvested through out coastal areas in Trinidad (generally on the west coast). In recent years, the popularity of raw oysters has made the occupation of harvesting oysters a very lucrative business. 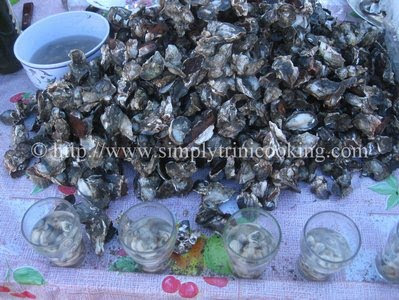 Harvested for sale in Curepe. 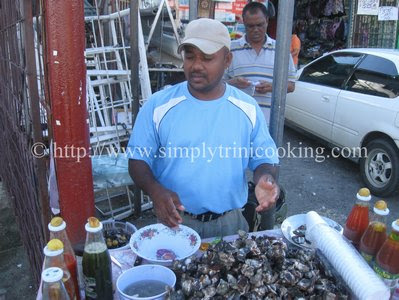 In Trinidad and Tobago, oysters generally are sold raw as a cocktail, served up with local seasonings, lime and of course pepper. From further research, I read that it can be prepared in other ways; they can be served broiled, fried, stewed, in a salad, with cheese, mushrooms, or potatoes, etc. This versatility of the oyster increases its appeal and elegance and is also giving me some ideas for recipes as well. 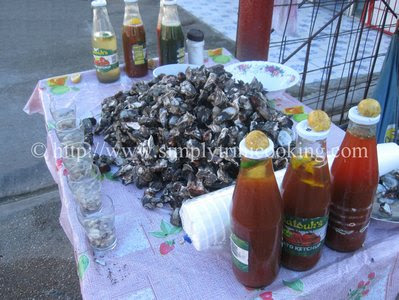 Mukash’s customers can enjoy their serving of raw oysters as a cocktail served up with his own special blend of local seasonings, lime, tomato ketchup, and of course pepper.

Caution to Take When Consuming Oysters

Oysters are known to be the cause of some diseases among its consumers; putrefactive products in all shell fish can result in food poisoning. Some people who eat them raw believe it should be served from the shells and be icy cold. In this state oysters may harbor some bacteria or toxic organism (such as vibrio vulnificus) that could cause chronic liver disease, impaired immune systems or cancer. For this reason many people believe it is best to avoid eating raw oysters.

As a result, they must be kept unopened, chilled at about 40 degrees F, and served as soon as they have been shucked. Shucked oysters are packed in their own thick juices in either glass or metal containers and iced to keep them fresh. This should be done on the premises where it is served. The shucked oysters are generally boiled for at least 3 minutes, or fried for at least 10 minutes at 365 degrees F until the shell opens.

Unshucked oysters are generally sacked and refrigerated at temperatures of 35 degrees F for up to 2 days, but not iced, as this will kill them. They can also be frozen up to 3 months. If they are unopened, they can live up to 2 weeks if the shell is kept moist with unchlorinated water. They should be cooked until the shells open: five minutes more if it is boiled; or 9 minutes more if it is steamed.

One of the biggest myths about oysters is that it is linked with improving male potency. Or is it? This idea that they boost male virility is is not far fetched as some would have thought. ( I know that some of you have been waiting for this paragraph especially 😀 !) ……. Legend has it that Casanova ate 50 raw oysters every morning in the bath tub. They have a high concentration of zinc (about 224 mg). The mineral zinc is essential for sexual endurance and appetite, and sperm production. Studies have shown that men with low sperm count generally have low zinc levels. Also, it is important to note that for an adult male the daily recommended serving of zinc is only 11 mg per day. 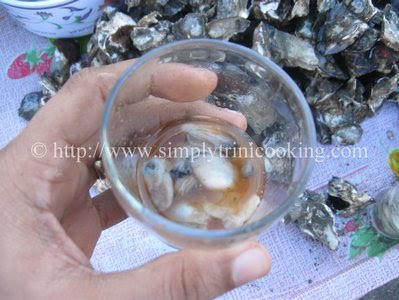 Here I am finishing up my glass of oyster cocktail.
I had mine with slight pepper. Delicious!

Anyhow, there are other nutritional benefits that oysters offer. They are an excellent source of: magnesium, phosphorus, protein, vitamin D, vitamin B12, iron, zinc, copper, copper, manganese, and selenium. But, there are some bad effects to eating them as well. Oysters, besides their toxicity, are high in cholesterol and sodium. Therefore, if you are pregnant or have immune problems it is best to avoid oysters.

Alternatively, there are lots of other foods that contain zinc which you could use, such as wheat germ, beef, pumpkin seeds, dried watermelon seeds, cocoa powder, chocolate, and peanuts. But, when compared to oysters they are no match.

I guess Casanova knew what he was doing! 🙂

Note: If you are in Trinidad and interested in having Mukash at any of your parties or limes, contact me and I’ll give you his contact number.