This was one recipe long in the making and with a lot of nudging and almost begging by one particular facebook fan I had to do this Trinidad garlic pork recipe before year’s end. But, before we go into the recipe I thought I would talk a little about this particular pork recipe and its historic and somewhat personal implications.

Garlic pork or Carne Vinha D’Alhos or better known as Calvinadage was brought to our Trinbagonian shores by the Portuguese and Madeirans who settled on the islands in the nineteenth century the 9th of May, 1846 to be exact aboard the “Senator”. Although there were a group that was here as early as 1630 …. Anyhow, check the link there is a ton of information for people wanting to know about the Portuguese in Trinidad and Tobago. I will be reading up a bit myself….

So, it is from here I would pick up the garlic pork story…. When I was researching this famed pork recipe I realised that I had a bit of Portuguese heritage…It actually took a recipe for me to find that out!

My mom said that her grandmother used to make this for them every Christmas and called it (canvi-an-die), well that’s her recollection of the word which I later found the right spelling to as Calvinadage. Then after some digging mom told me her surname was Fereira (not sure how it was spelt) Very interesting indeed.

So this was a recipe I had some personal connection to and wanted to do properly. But my experimental side always comes out one way or the other. So as an added twist to the traditional I added the ever popular Mr. Chadon Beni.
There was a little quandary in my mind as to which of the thyme I should use. Some recipes, I saw, used the fine leaf thyme while my aunt said that they used the Spanish thyme aka oregano…. Eventually, out of necessity, I used the “oregano” since fine leaf thyme was hard to come by in the market: easily understood, since this is pastelle season :-).

Anyhow, after much work in the kitchen preparing the ingredients here is my version of Calvinadage or simply put Trini Garlic Pork. Enjoy! 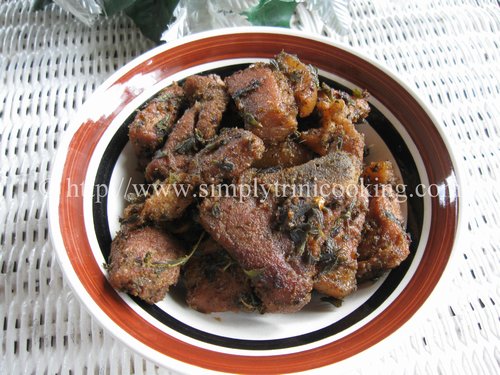 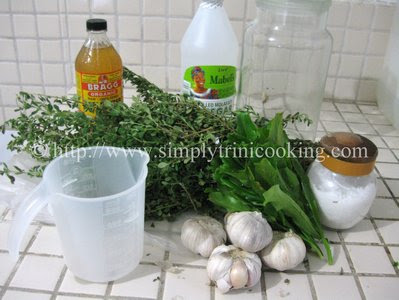 The ingredients to make garlic pork. 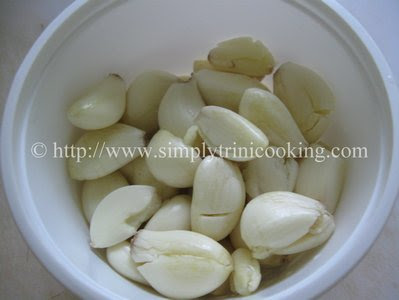 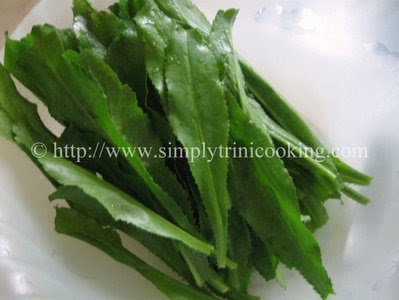 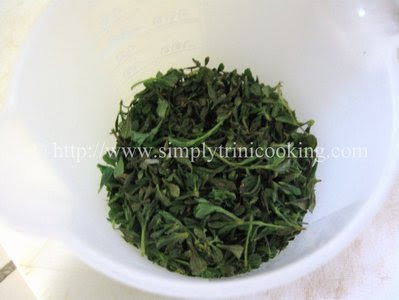 …and strip the leaves off the thyme stalks. Set aside. 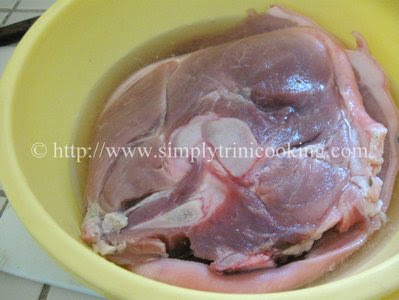 Wash the pork in 1/2 cup of the white vinegar. 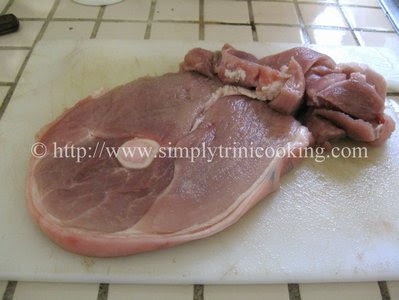 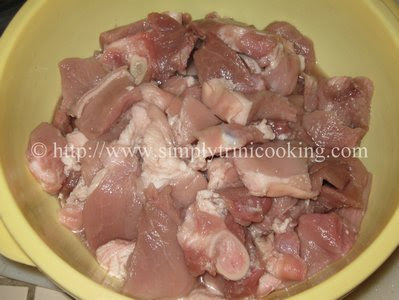 Cut up then drain and wash again in the remaining 1/2 cup of white vinegar. 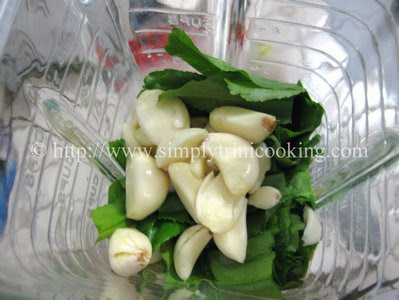 Blend the chadon beni and garlic in 1 cup of braggs vinegar. 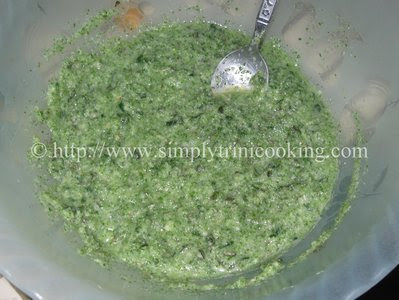 Pour out in a bowl and add the thyme, braggs vinegar and salt to taste and mix well.
I used 1 tbsp.
Note: Here you will have to let taste be your guide. Not too salty, not too acidic but just right. 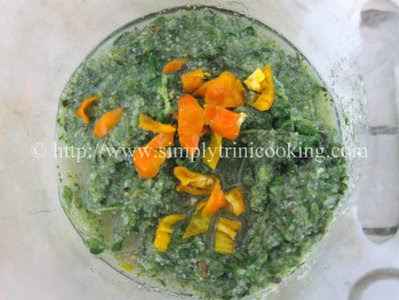 Add a few spoonfuls of the “seasoning” and
a few pieces of hot pepper into a large mouth bottle.

Note: I used one of them long time bottle we used to soak pommecythere in. Remember those? It was perfect! 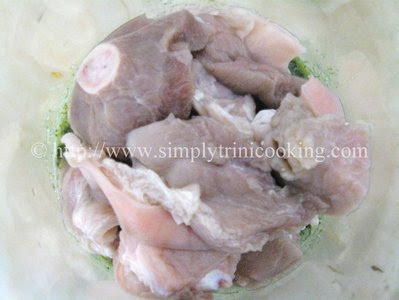 Then add a layer of pork. 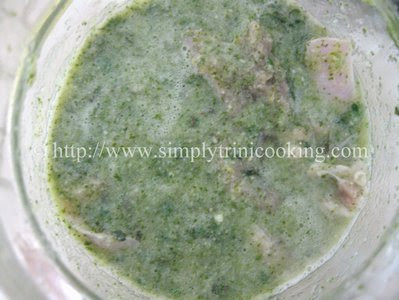 Continue alternating the layers then pour in the rest of seasoning.
Note: Make sure the pork is completely submerged in the seasoning. You may need to push down some of the meat. 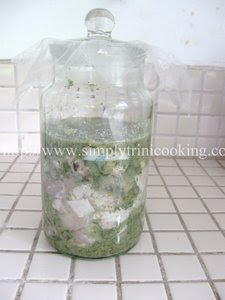 Place a piece of plastic over the mouth of the bottle, cover and leave to cure for 3 to 4 days.
Note: Some people leave their garlic pork for a longer time but from experience I find that the pork tastes a little acidic. But that’s just my taste. You can leave it longer if you wish be it a week , 10 days or three weeks. I actually know of someone who left theirs curing for a whole year!

Ok, so while we wait for three or four days to pass we could do something to kill some time.

A man walked into a Kentucky Fried Chicken restaurant in Trinidad
and “passed out” on the floor. People gathered around to help him
by fanning and doing everything they could to help him regain
consciousness. Someone peeled an orange and started squeezing the
juice into his mouth, whereupon the man suddenly came back to life,
pushed the person away and yelled, “if ah did want orange, ah
woulda fall down in de market.” Source

Anyhow back to the garlic pork……..

…………..So three days have passed and we’re ready for some garlic pork. 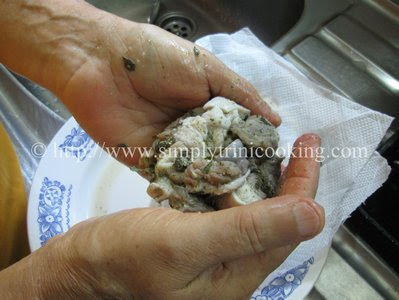 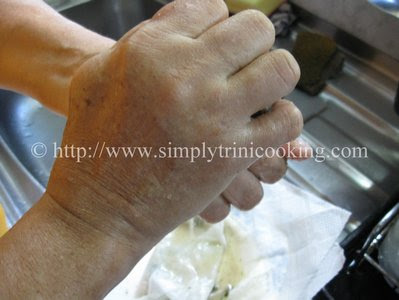 Squeeze out the excess moisture and pat dry with paper towels. 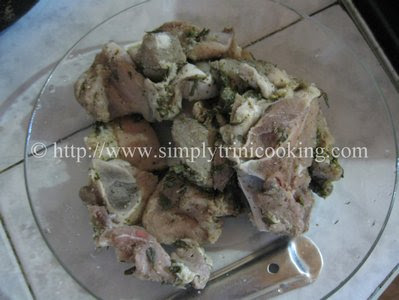 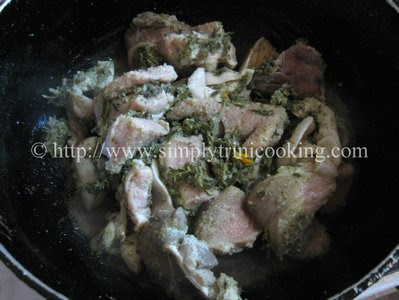 Place about 1 tbsp of oil in a pot and add the pork.

Caution: When pork is frying in its own fat it tends to “burst” and splatter the hot oil, so cover the pot and be careful. I nearly got burned ……… Nearly! 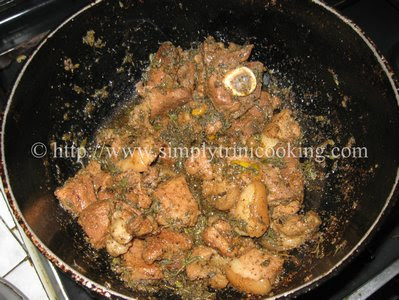 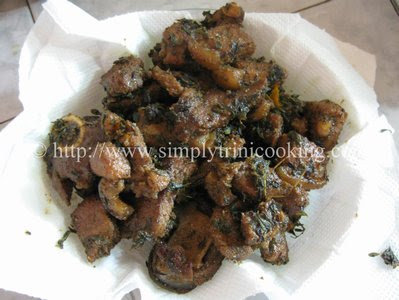 …and drain on paper towels. 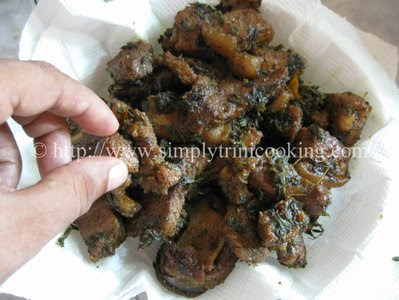 So there you have it Trini Garlic Pork. My mouth is “watering” while I type….Yuh smell dat?

If you liked this trinidad garlic pork recipe why not leave a comment in the box below.