You are here: Home / Articles / A Cocoa Story II – How Cocoa is Made Trini Style
“When yuh have cocoa in de sun, look out for rain”


This saying has had such a profound effect on me as child growing up in Trinidad and Tobago that even now as I write this second installment on A Cocoa Story, I wonder how this saying could have come about. Could the inventor of this saying been a wise slave who somehow used his or her surroundings or everyday occurrences on the plantation to impart wisdom to others? Or did it come from the “Cocoa Panyols” that worked in the Cocoa Plantations? We would never know how the saying came about, but today it still has pertinent meaning.

How Cocoa is Made

Making cocoa is a long process, as you would see in the pictures below, sometimes taking months based on the weather conditions, i.e. not getting enough sunlight to dry the cocoa. In fact what you’re seeing here is a few months of photography put together to show the different steps in the production of cocoa. I opted to show the very traditional way our forefathers would have made it in Trinidad and Tobago using the simple but effective mortar and pestle. What was left out was the “dancing of the cocoa” and using a cocoa house to dry the cocoa since we did it on a small scale: only a few cocoa pods were used.

It was a joy to relive this making of cocoa since most people usually buy cocoa now instead of making it. OK! Enough of my rambling, time to make some cocoa and remember …….

“When yuh have cocoa in de sun, look out for rain”….I really mean it: your cocoa won’t dry 🙂

How Cocoa is Made Trini Style 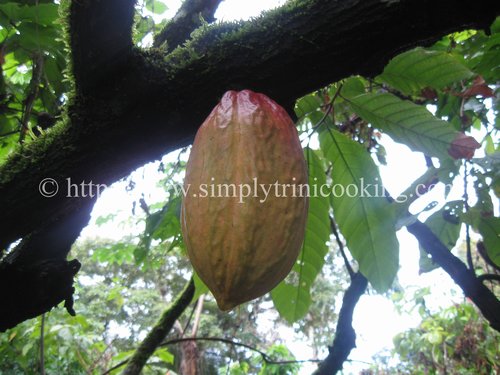 This is the ideal cocoa, ripe and ready to be picked. 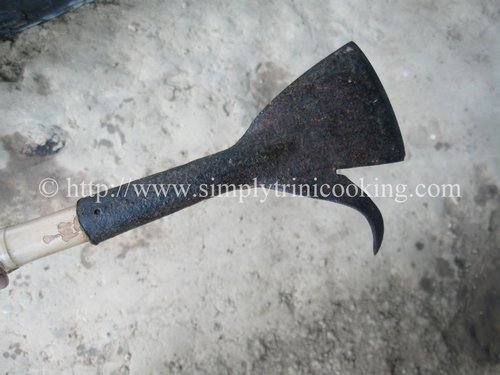 To pick the cocoa, a cocoa knife is used. 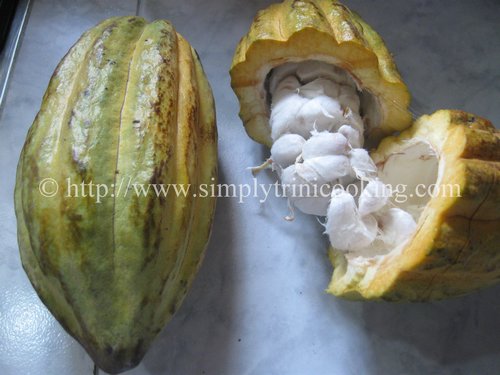 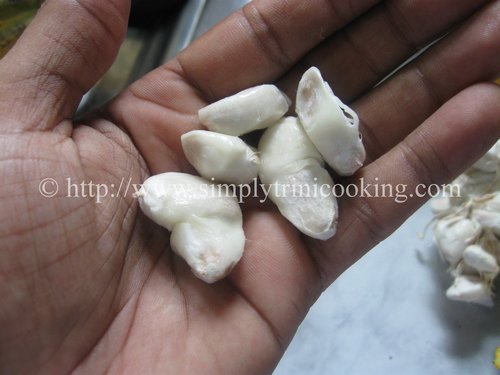 After the cocoa is picked, it is cracked and the seeds are taken out. The next process (not shown) is referred to as “sweating the cocoa” which is a process where the pulp ferments and liquefies, leaving the cocoa bean. Now we’re ready to dry the cocoa. 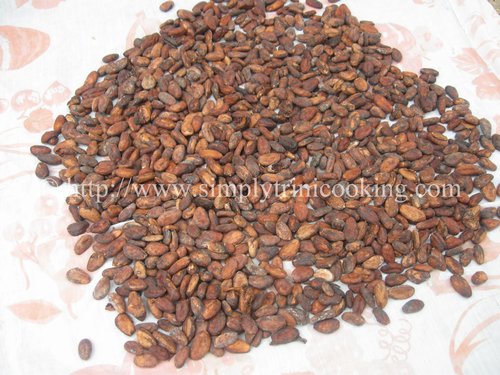 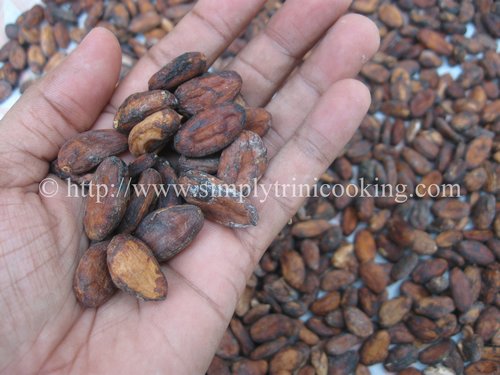 The process of drying the cocoa usually involved a cocoa house.
Since we did only a small amount it was spread out on a cloth and dried in the sun. 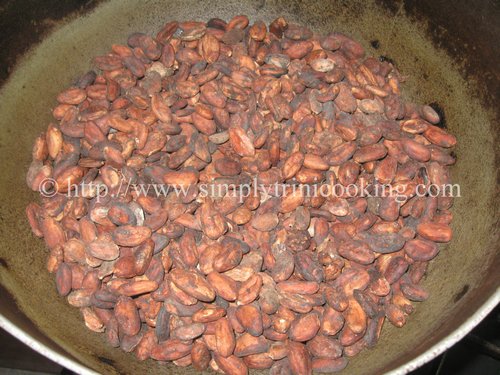 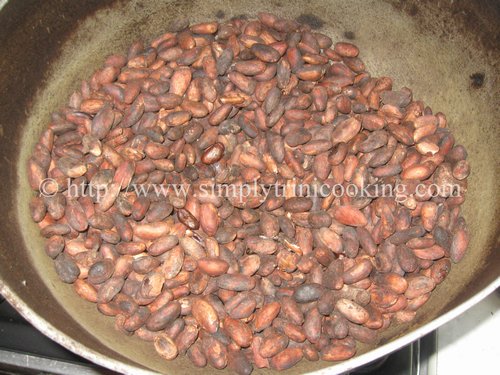 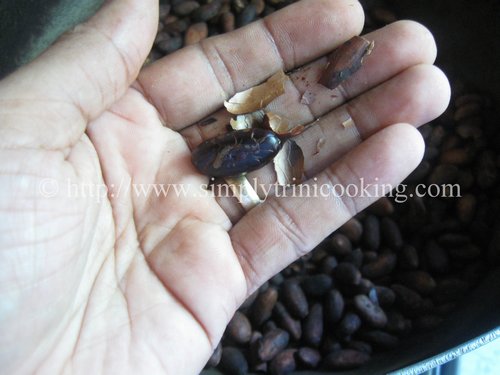 After the weeks of drying the cocoa it is now ready to be roasted. The beans are parched on a low fire until the outer skin can be easily peeled by hand ( similar to the peeling of peanuts). 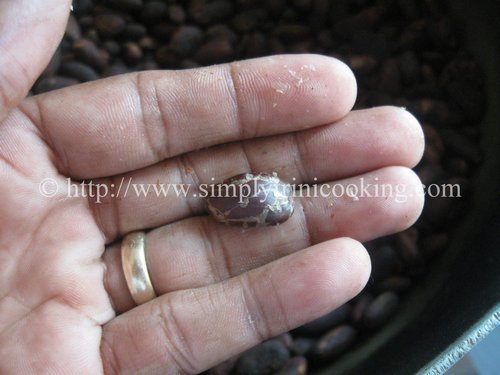 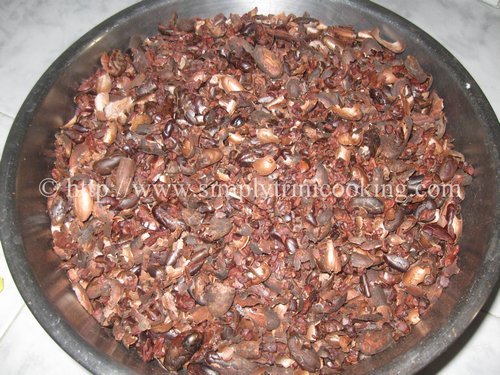 Each cocoa bean has to be shelled by hand. 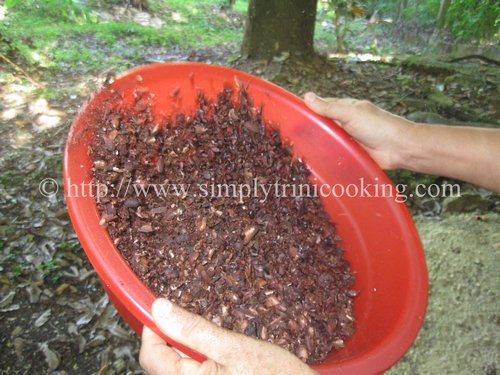 Then it is “fanned” to separate the skin … 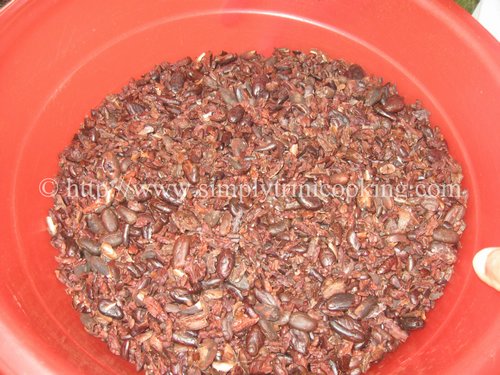 Now it is time to make the cocoa. 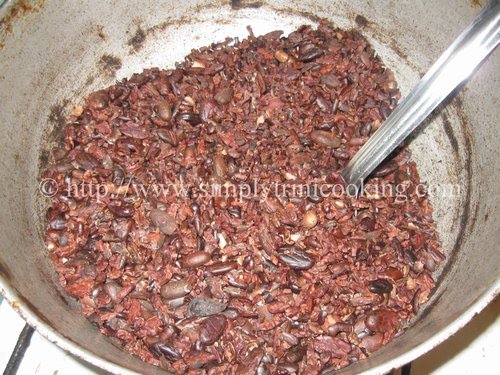 Before the beans are processed they are first warmed in a pot. 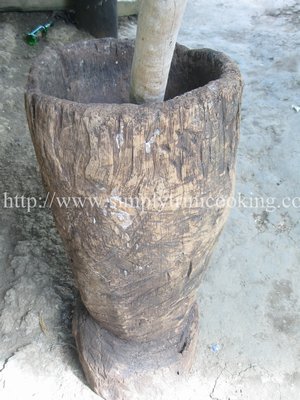 We are using the traditional method using a mortar and pestle. 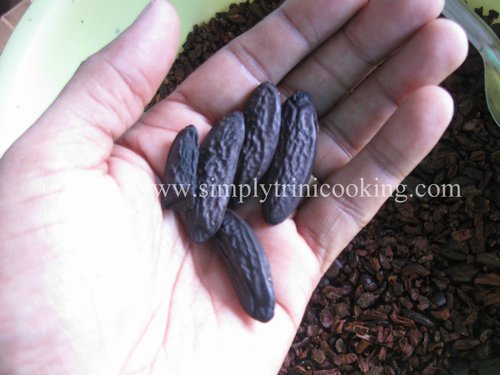 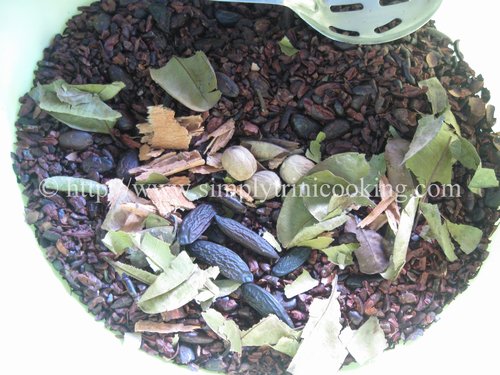 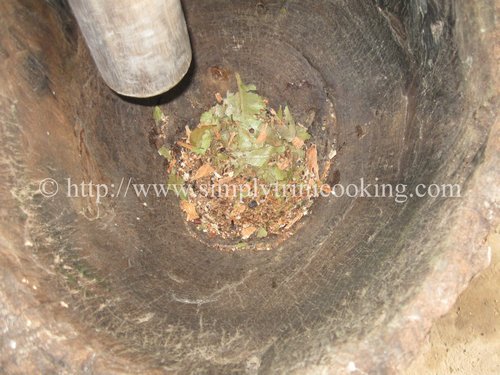 First, the spices are pounded in the mortar… 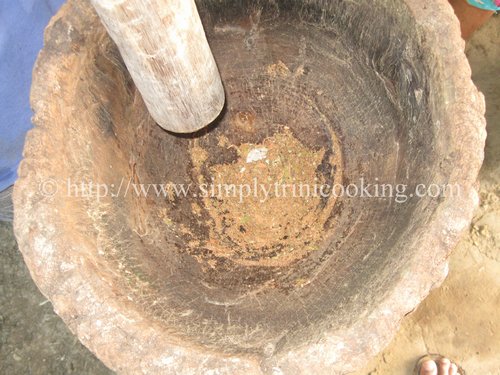 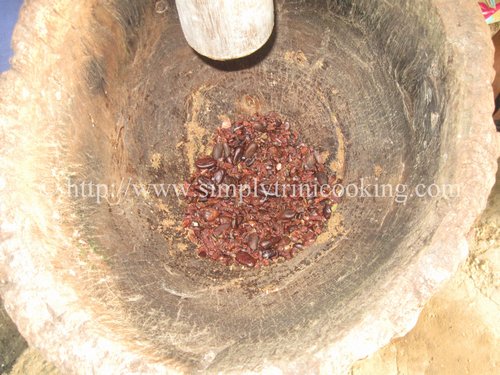 Then the cocoa beans are added…. 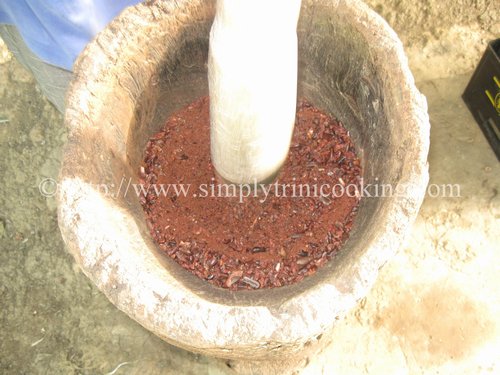 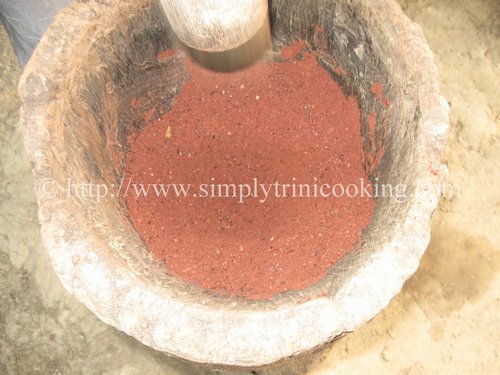 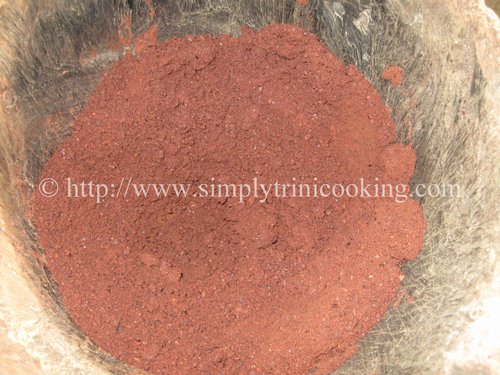 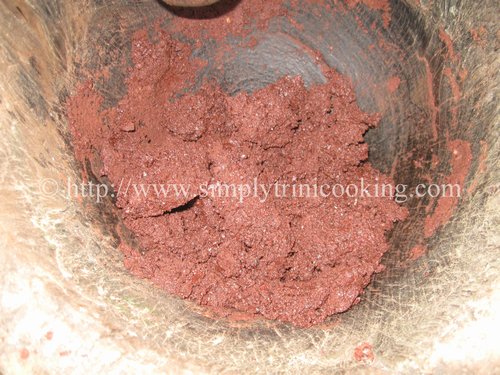 After a while the pounded beans begin to “cake” in the mortar.
This means that the cocoa is nearly ready to be formed. 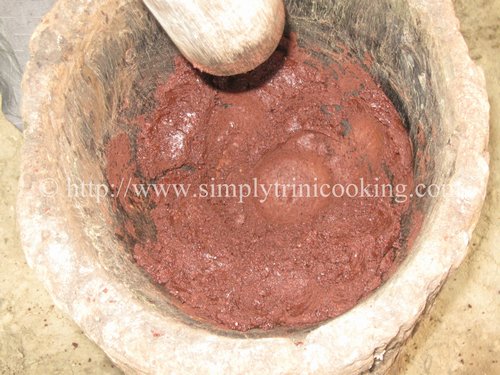 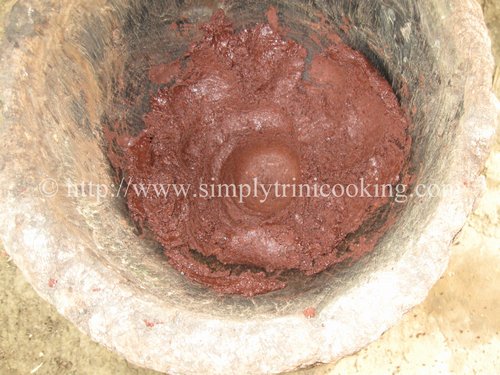 The cocoa is now ready to be formed. Notice the sticky texture. 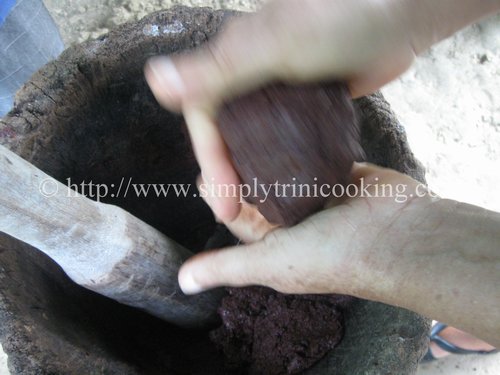 It is then molded by hand into the desired shape. 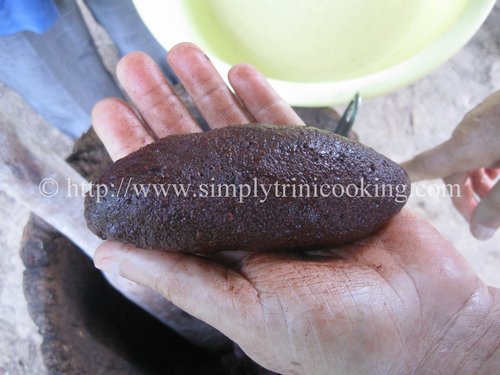 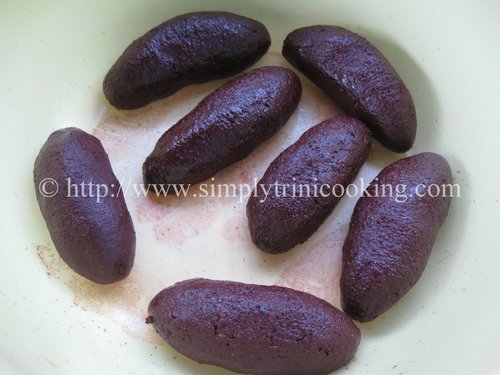 We were able to make seven cocoa bars.

How to make coconut oil
A cocoa story 1: Cocoa in Trinidad and Tobago

Note: Don’t forget to leave your comments in the comment box below about this post on how cocoa is made Trini Style.